What is Gaming for Social Good?

An individual or team playing video games in exchange for charitable donations. 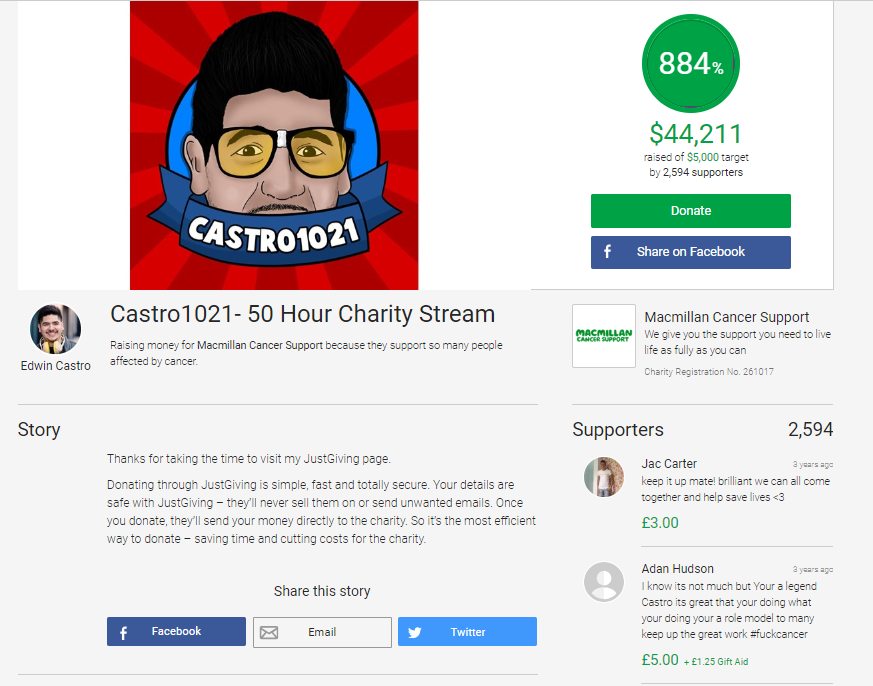 This usually involves the individual broadcasting their gameplay live through a streaming platform such as Twitch or Mixer. This behavior is already ingrained in the gaming community, as supporters are used to donating to streams they follow to make sure they can keep broadcasting.

A livestream is where media is being broadcasted in real-time. Most Vloggers and Gamers use livestreaming as a way of getting closer and more interactive with their supporters. Livestreaming platforms are sites specifically designed to facilitate live broadcasting. Sites such as Twitch, YouTube Gaming and Mixer have received acclaim for being easy to use and provide open methods of communication for users to be able to live-chat to their supporters at the same time.

What do you need to game?

Most games today can be played on a computer so you don’t need to invest in consoles or video games to be able to participate. If you want to stream your fundraising efforts you will need the following applications which are all free to use!

To connect your video broadcast to your streaming platform you will need software to do this. OBS is free to download and we have got a great how to guide on how to install this here

Beginners guide to getting started

If you are brand new to gaming and want to explore how Gaming could work for your charity, simply follow our tips to get started below.

Need some inspiration? Click here for some great examples

Add videos, text, and images to drive engagement and create excitement around your event.

Drive participation by sharing your campaign to your supporters and fundraisers.

For the Gaming for Social Good Pros

So you've already got to grips with gaming, whats the next step?

For charities and organizations that want to go that one step further with their Gaming strategy, we recommend creating microsites that pull through all your Twitch livestreaming and fundraising in one place. Our in-house Digital Solutions team have worked on building incredible websites for brands and charities that want to establish a long-standing gaming arm for their organization.

Include the following in your Microsite: 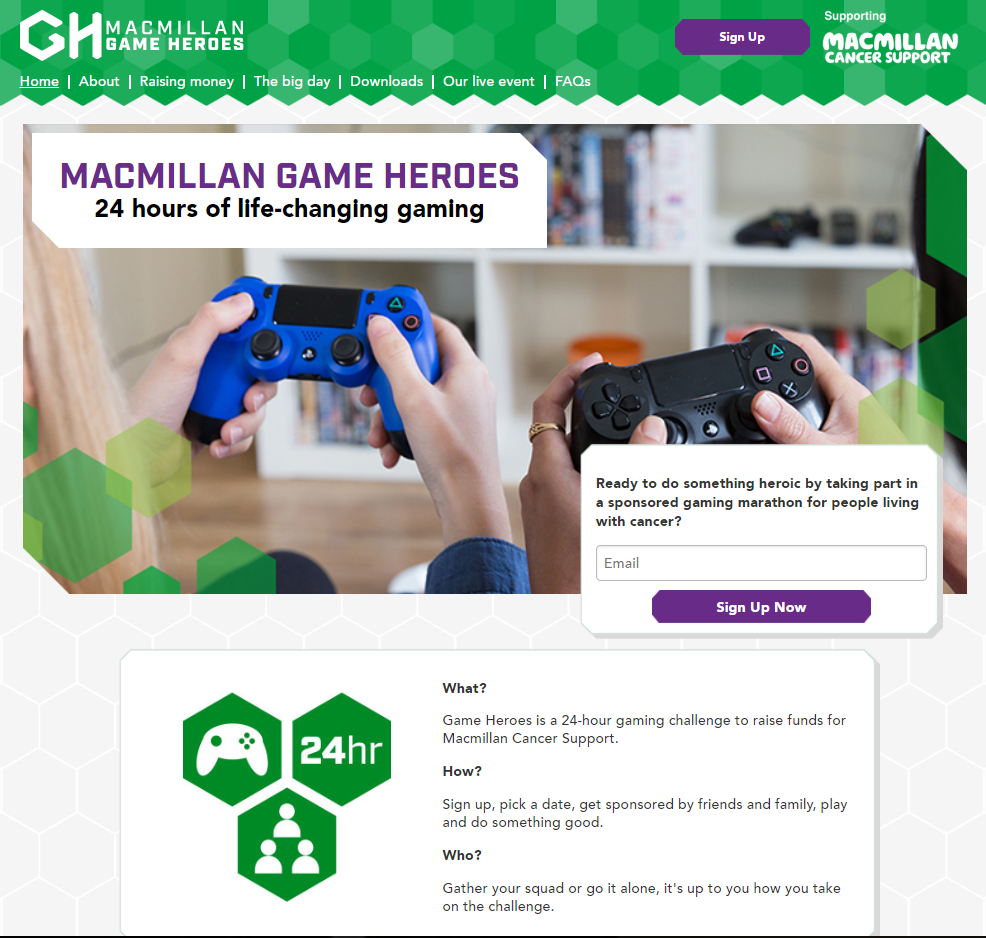 Macmillan host an annual Gaming event ‘Game Heroes’ (prev. Game Changers) that raised over £226.4K+ in 2017. Macmillan utilized big Gaming influencers throughout their campaign to promote the charity to their network. They utilised JustGiving’s API’s to use automatic page creation for a seamless user journey.

SpecialEffect are renowned for being on of the biggest charity players in the Gaming for Good space. Their flagship Gaming Marathon ‘Gameblast’ raised £102K+ on JustGiving in 2017 and over doubled to £225K+ in 2018. Gameblast attracts some of the biggest games industry influencers and companies gaming together over the same set period to raise awareness and funds for their charity. 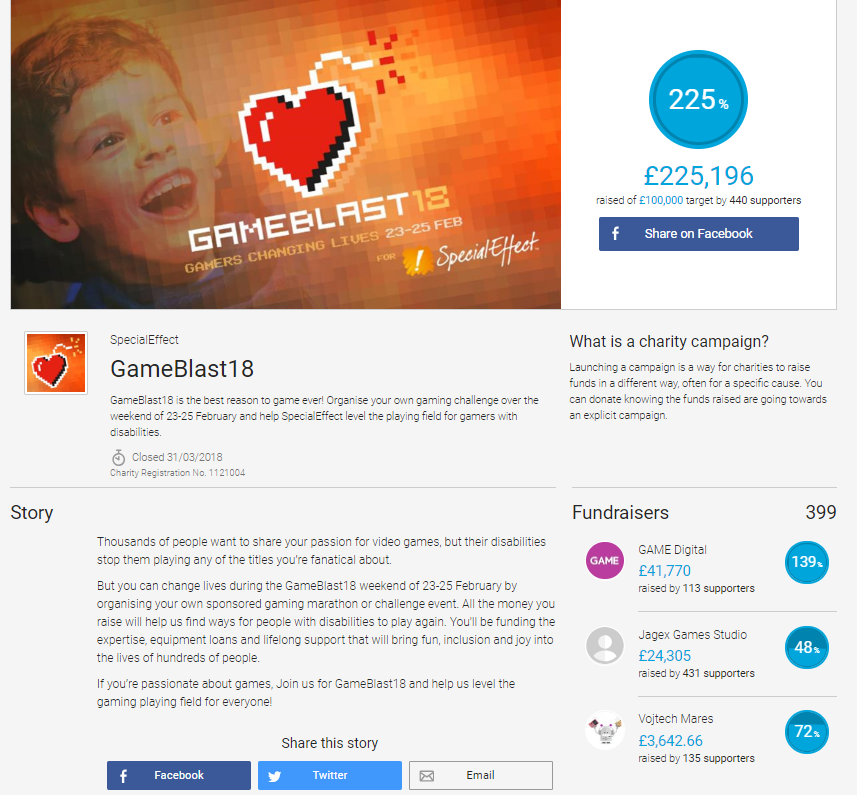 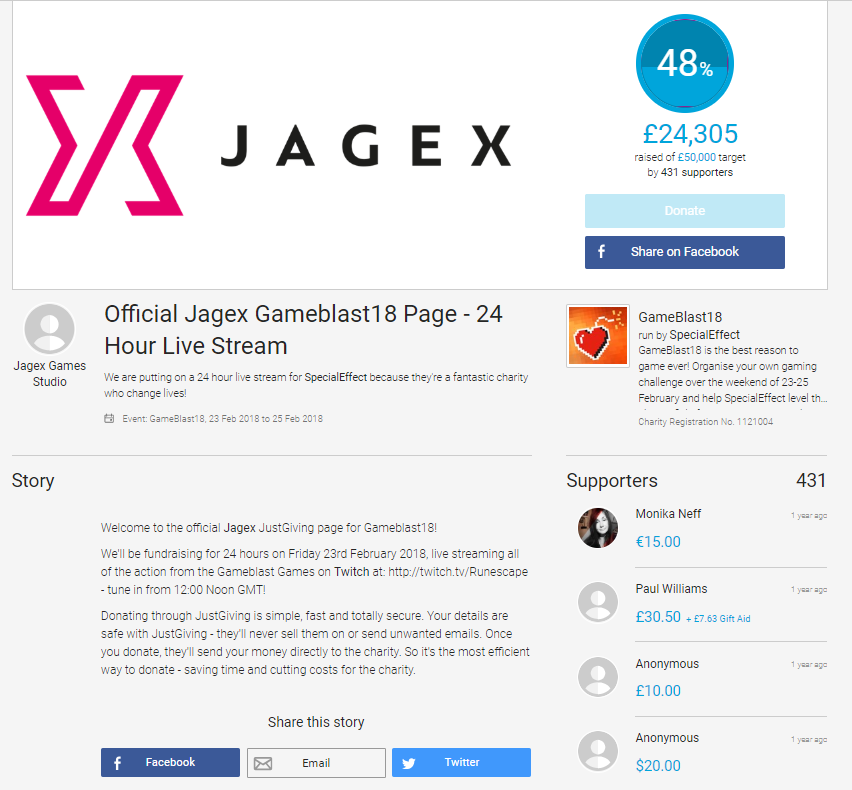 Jagex Games Studio created the game ‘RuneScape’ and created in-game awareness for mental healthcharities. As well as creating awareness sections in-game they also created a ‘well of goodwill’ where Gamers could donate their in-game tokens to charity. Jagex has raised over £225K in 12 months for mental health charities CPSL Mind, The Prince’s Trust and YMCA Right Here.